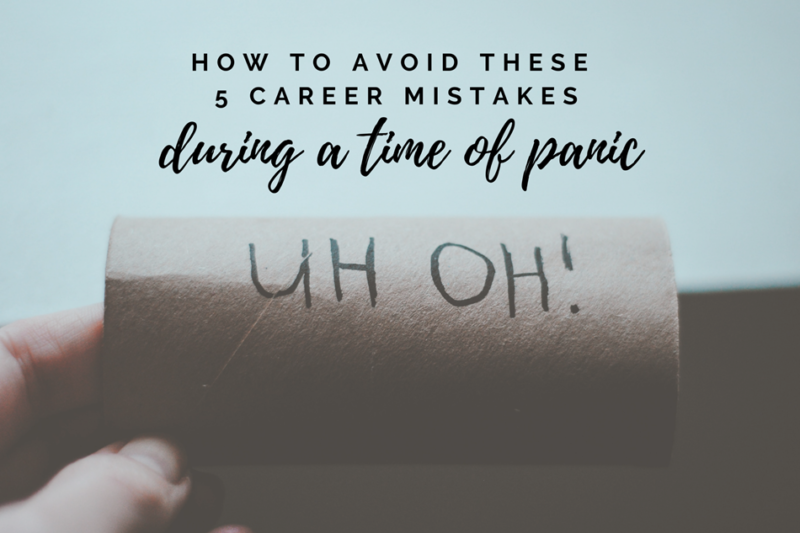 Are you starting to panic a little about the future?

If so, be careful how you make any upcoming decisions about your career. Especially if you’ve lost your job due to the current economic situation.

You can end up making several career mistakes by letting fear or panic drive your decisions.

5 common career mistakes made in a panic

There are five common career mistakes I see people make when they find themselves in a bad job market and panic. These mistakes are:

Allow yourself as much time as you financially can to find a job that’s the right fit. This prevents you from having to go through yet another job search six to twelve months later.

Learn more in my post, “What You Need to Know About Job Loss”:

What You Need to Know About a Job Loss

2. Not negotiating a higher salary or better benefits

Even in a tight job market, most employers expect you to negotiate before accepting the first offer. If you can’t negotiate salary, there are some other things you can negotiate, like better benefits or being able to work from home a few days a month. Either way, don’t make the mistake of leaving money on the table.

Learn more in my post, “How to Make Smart Investments in Your Life and Career”:

How to Make Smart Investments in Your Life and Career

3. Going back to school when you can’t find a job

I remember back during the recession of 2008, a lot of people who couldn’t find jobs went back to school to get their MBA. They thought this would make them more marketable once companies started hiring again. However, it doesn’t always make sense to get deeper into debt. Especially if you don’t know yet if an advanced degree will help you.

Learn more in my post, “How to Know If You Should Go Back to School”:

How to Know If You Should Go Back to School

Speaking of avoiding debt, don’t be tempted by empty promises of earning big money fast by signing up with a multi-level marketing company. This is probably the BIGGEST career mistake you can make. Don’t be swayed when someone you haven’t heard from in forever, all of a sudden wants to get together to discuss “a wonderful opportunity“. It will cost you money both upfront and in the long run.

Learn more in my post, “You Shouldn’t Have to Pay for Your Paycheck! How to Beware of MLMs”

You Shouldn’t Have to Pay for Your Paycheck! How to Beware of MLMs

5. Not taking advantage of career coaching and career resources.

Perhaps your hard-earned money would be better spent on career coaching to help you figure out your next step. paNASH was recently voted as one of the top eight coaching services in Nashville for the fourth straight year in a row.

But if you don’t have the money for one-on-one career coaching, there are several free and affordable resources here on the paNASH blog and in the paNASH video library.

Learn more in my post, “Get Unstuck! How to Know When It’s Time to Invest in a Career Coach”…

Get Unstuck! How to Know When It’s Time to Invest in a Career Coach

…and my post, “How to Know When to Get Career Help”:

How to Know When It’s Time to Get Career Help

While the job market is uncertain right now, three paNASH clients have been hired for new jobs in just the past few weeks. One of whom who had multiple offers to choose from.

Now is not the time to panic or lose hope. It’s time to do what’s within your control, which includes making good decisions based on logic, not fear.

Here are some additional posts to help you: 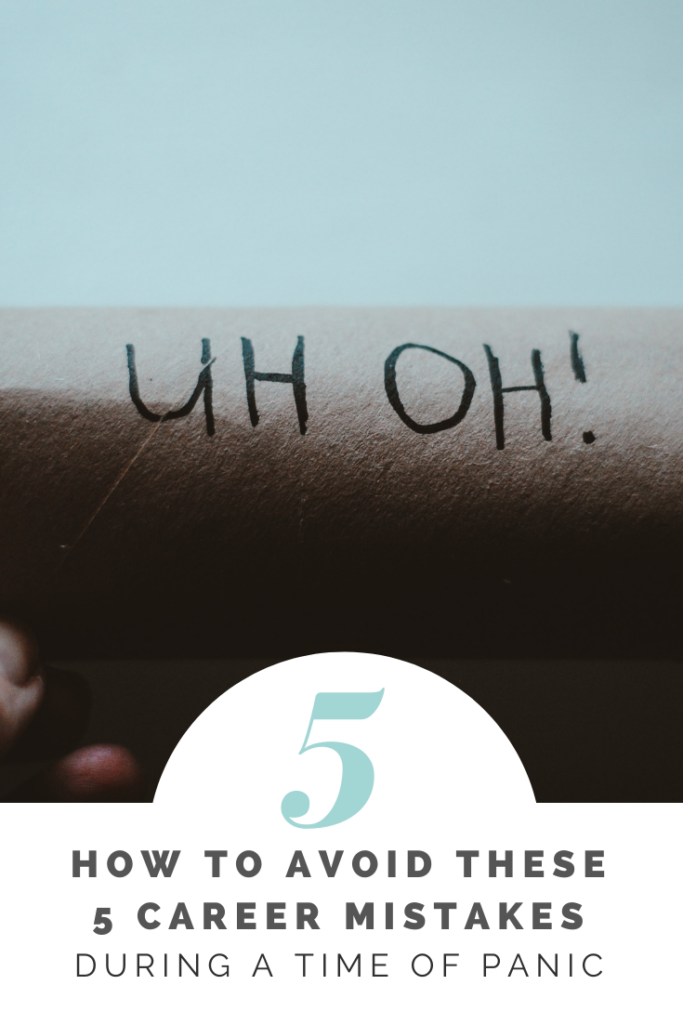 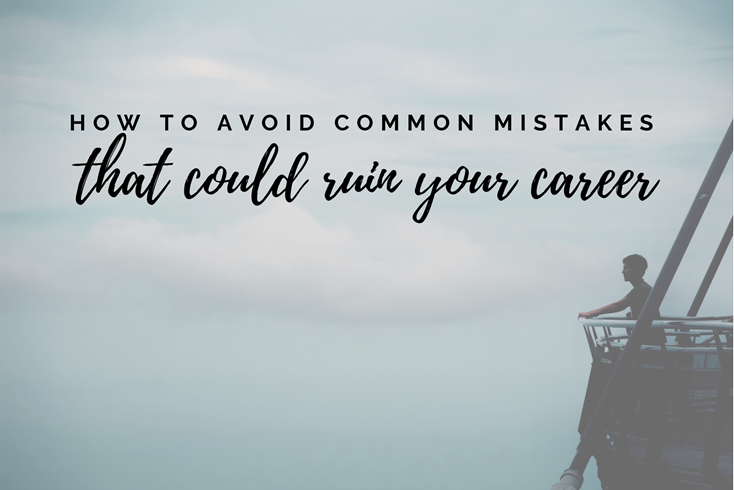 How to Avoid Common Mistakes That Could Ruin Your Career

There are many wrong moves you can make in your career. We’ve all fallen on our faces a few times, especially during the learning curve of a new job. But some mistakes are worse than others.

Today I’m focusing on some of the common mistakes that can ruin your career and how you can avoid them. I won’t include the obvious ones like doing something illegal. Everyone should already know not to do anything illegal!

6 Common Mistakes That Can Cause Career Ruin

1. Agreeing to a superior’s order to do something unethical.

It’s obvious to most people not to do anything illegal in their career. But it may not be so obvious to others they shouldn’t do anything unethical. Even if it’s an order from your supervisor.

If your supervisor has no problem making such a request, he or she probably has no problem throwing you under the bus when the unethical act is discovered. And it will eventually be discovered. Everything comes to light sooner or later.

If ever faced with an order to do something unethical, explain your discomfort and document the conversation. If your boss tries to push the matter or threatens to fire you, start looking for a new job ASAP! You do not want to continue working for someone like this.

If you get fired for refusing the order, you should be able to collect unemployment until you find something new. And depending on the circumstances, you may have a legal case worth pursuing.

2. Relying on just one source of income.

Since anything can happen in your career where a scenario like the one described above could leave you suddenly without a job, you should never rely on just one source of income.

As I’ve written before, there’s no such thing as job security in any company. So start NOW pursuing a side hustle or passion project for a little extra money or start making smart investments. This will help tide you over if you find yourself between jobs or decide to start your own business.

3. Accepting a counter-offer from your current employer.

One of my co-workers at a university where I used to do career advising started looking for a new job at a different university. When he had a potential offer from another place, he casually mentioned to me he might tell our supervisor to see if she’d counter-offer with more money to get him to stay.

I looked him dead in the eyes and told him “Do NOT do it!” He looked a little confused when he asked me “Why not?”

There’s a reason (or reasons, plural) why you went looking for work elsewhere in the first place. It’s likely those reasons won’t change if you stay for more money. And while the additional money may seem great at first, it won’t outweigh the distrust and resentment which will grow between you and your supervisor or co-workers after cutting this type of deal.

When you do finally leave your employer (and you will), word will get around to other potential employers how you manipulated the situation. This will make you the kind of candidate they won’t want to hire.

4. Overstaying at an unhealthy job.

If your job is affecting your mental or even your physical health, it’s time to go. No job is worth your sanity or your health.

If you overstay at a job like this, you could become so unhealthy you run the risk of not being able to work at all, and therefore losing your income anyway.

Do what it takes to find something new using the resources available on this blog and on paNASH’s on-demand video courses.

5. Agreeing to take on extra work without extra pay for an indefinite amount of time.

There may be times when your company is short-staffed and you have to pick up the slack. When it’s necessary to take on extra work for the best interest of the entire company, you should do so.

However, this should only be temporary. And before agreeing to this, ask what the set end date will be for the extra workload. If you’re told, “until things settle down,” don’t accept this as an answer.

Instead, indicate the length of time you’re willing to do the extra work and schedule a meeting as soon as possible to discuss how you’ll be compensated for any extra work done beyond the specified date.

For instance, you’d say, “I’m happy to cover Sallly’s projects until the end of May. You and I can meet next week to decide how to move forward in June.”

Whatever agreement you come to, get it in writing.

If you’re still doing Sally’s work in June, you need a title change and pay adjustment, or at least a bonus.

Unless there’s a formal agreement in place or you’re receiving tuition reimbursement, never promise not to job hunt or to stay with your company for any specific length of time.

If your boss begs you to stay in a time of high turn-over or a rough patch, ask her for an employment agreement giving you the same assurance she’s asking of you. If she won’t or can’t, don’t allow better opportunities to pass you by.

These are just a handful of mistakes that can ruin your career, but equipped with the knowledge above you’ll be able to maneuver these landmines so you can move successfully through your chosen career path unscathed. Consider it career self-defense! 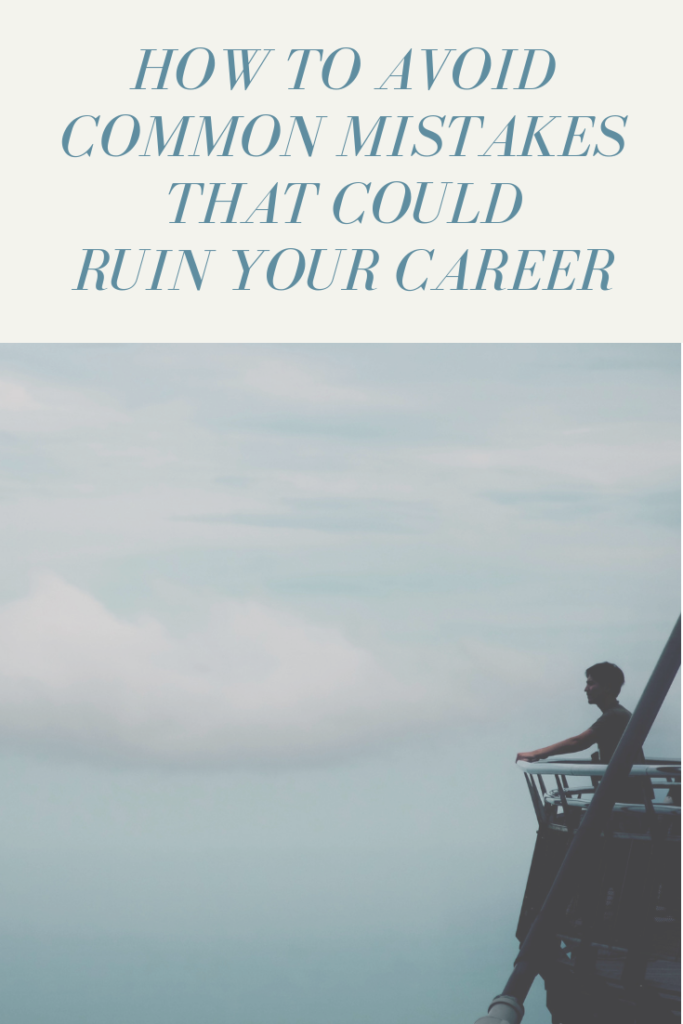 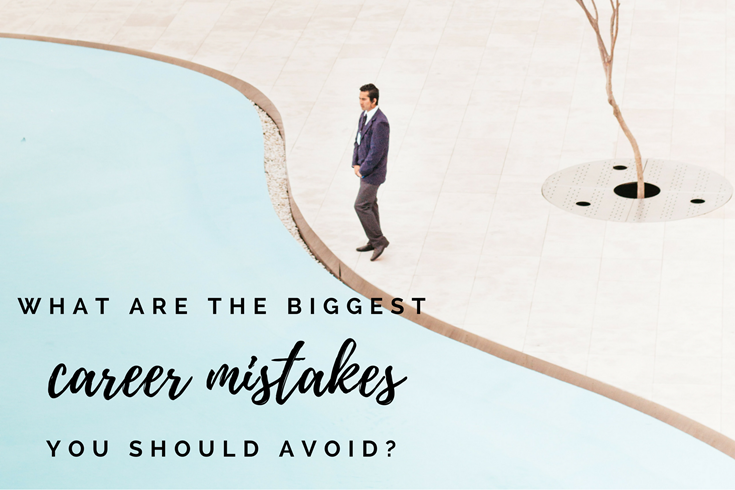 What Are The Biggest Career Mistakes You Should Avoid?

The post below was originally published on Quora as a response to the question, “What are the biggest career mistakes to avoid?”

The number one career mistake to avoid is to go into a career someone else is pushing you into, whether that includes parents, spouse, friends, etc.

The number two career mistake to avoid is going into a career just because it pays a lot of money.

In either situation, you’re likely to end up hating your job, resenting those you’re trying to please, and regretting your decision.

As a career coach who works with people who are in career transitions, typically in the middle of their careers, I see a lot of regret.

They come to me looking back on their decisions realizing they were climbing a ladder that was leaning against the wrong wall.

While for most it’s not too late to make a career change, it is more challenging due to more financial responsibilities at that age.

Even if they’re making really good money, they often find that having taken a job just for the money was at the expense of:

A Time to Experiment

While you don’t have to start out in your career knowing exactly what you want to do, early career is probably the easiest time to experiment with different jobs to help you discover your passion because at this stage in life you have:

But It’s Never Too Late

This doesn’t mean if you made any of the two mistakes listed above in your early career you can’t go back and correct those mistakes or avoid them in mid or late career. You just might have to be a little more creative in your approach.

You can still experiment in some (or all) of the following ways:

There’s a lot more I could write about in response to the above question, but it would be a novel. The bottom line is, pay attention to:

If you pursue those things, they will build upon one another, leading to new opportunities that will eventually make up the whole of your career.

A career you can look back on with satisfaction and without regret.

For more tips on how to pursue your passions in your life and your career, subscribe to my newsletter at and receive a free downloadable 8-Step Goal-Achievement Plan. 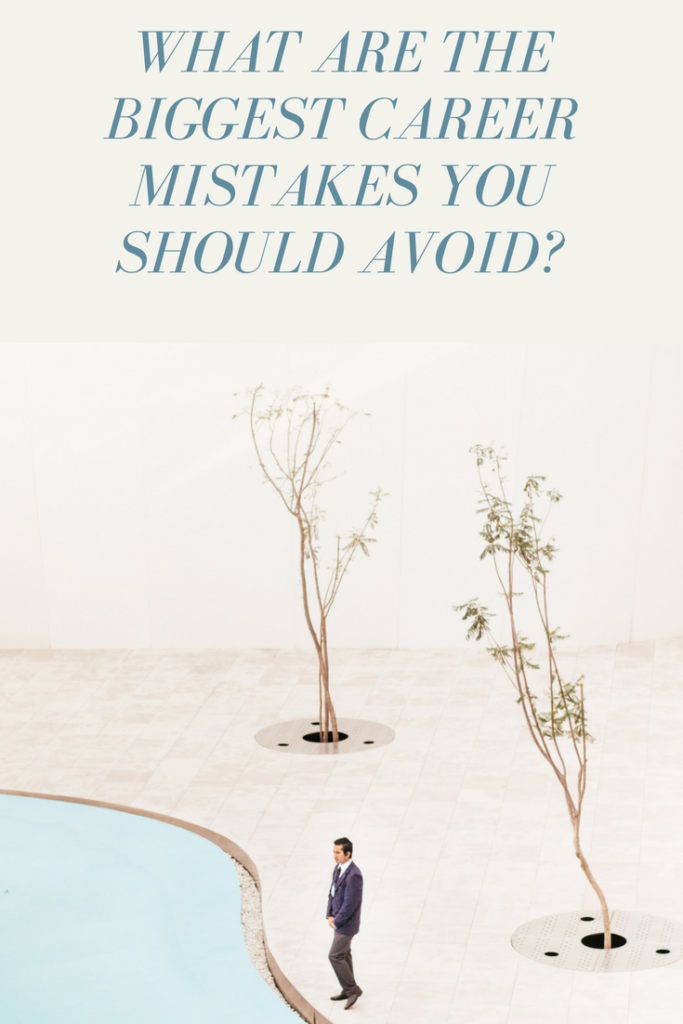