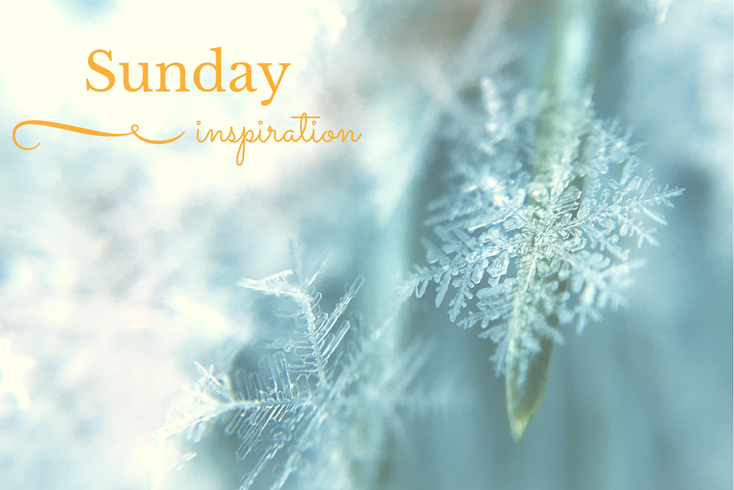 Sunday Inspiration: Do You Have a Passion That Surprises and Delights?

Welcome to “Sunday Inspiration,” a bi-weekly devotional for those seeking spiritual encouragement in the pursuit of their passions. I hope these posts will inspire and motivate you in your life and career in addition to our weekly blog posts. Enjoy!

Meet Ed. Ed is a friend of mine I met about three years ago in an art class I took. He’s a retired guy who has a heart for helping other people make the transition from career to retirement.

Ed also has a passion for a rather unique skill he learned 40 years ago. This skill isn’t something he set out to learn. Instead he remained open to the idea of new things, and as a result found a passion that not only surprised him, but also surprises a lot of people. It’s a skill and passion he doesn’t earn money for, but instead uses to give back to others.

As you read Ed’s story, think about when the last time was you kept yourself open to learning something new. Do you have a skill or passion that maybe doesn’t earn you money, but gives you joy when you use it to give back to others? Does it serve as an outlet for you and give you purpose?

I play spoons. I’ve played spoons for over 40 years, ever since my wife surprised me for my birthday and took me, along with the friends she had invited, to a concert.

Two gentlemen representing the Smithsonian Institute were touring the country playing a concert of authentic American music—sea chanties, Dixieland jazz, blues, and a host of other music all born of the diversity we have in this country. The highlight for me was “Turkey in the Straw” with Jew’s harp, washboard, hambone, and, my personal favorite, the spoons.

At the end of the concert, we were invited to see the instruments and get a spoon lesson. Before that day, I’d never seen or heard spoons played. I was surprised and delighted.

Our party then headed back to my house for birthday cake. The guitars came out, we raided the silverware drawer, and we all tried to play spoons. 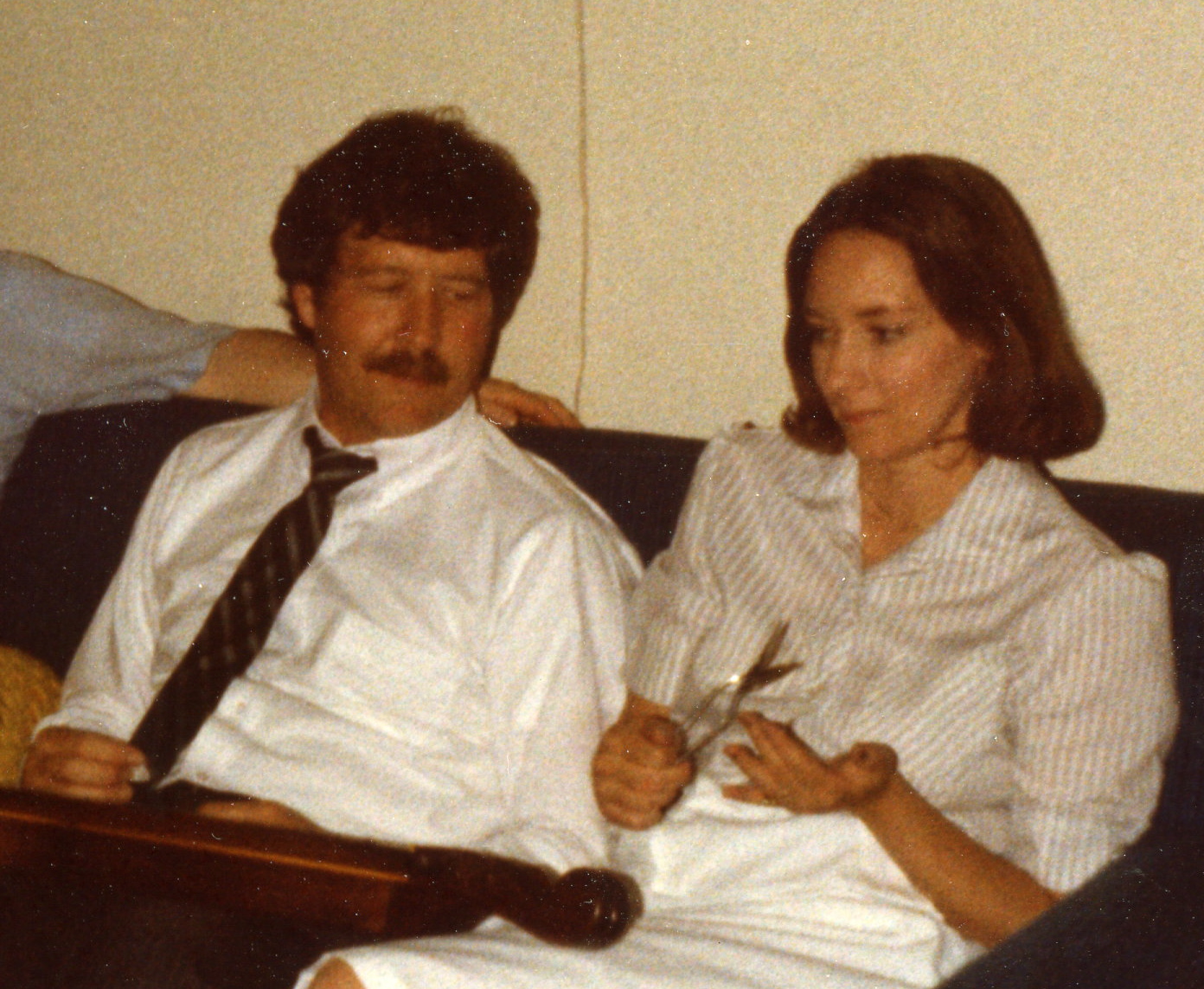 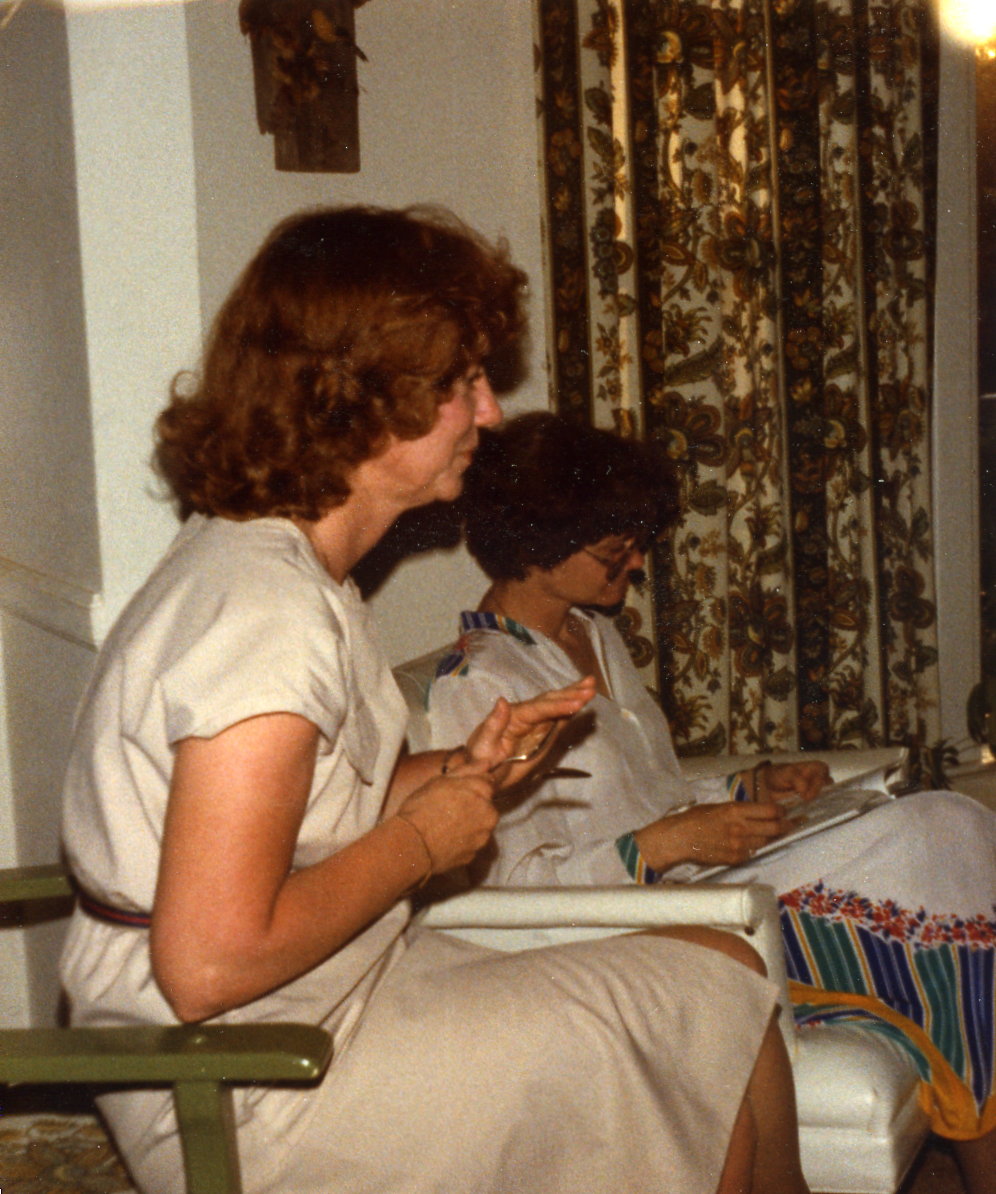 Here Bill, Lanette, Sheryl, and Carol all give the spoons a try in our living room.

The group Earnie formed grew and became the Blakemore Boys Bluegrass Band. For 35 years we sang at church events around town, also for the infirm and homebound. We took our music to hospital beds, visited nursing homes, and did special fundraising concerts and caroling. One highlight was performing and recording a Christmas cantata that Earnie wrote. 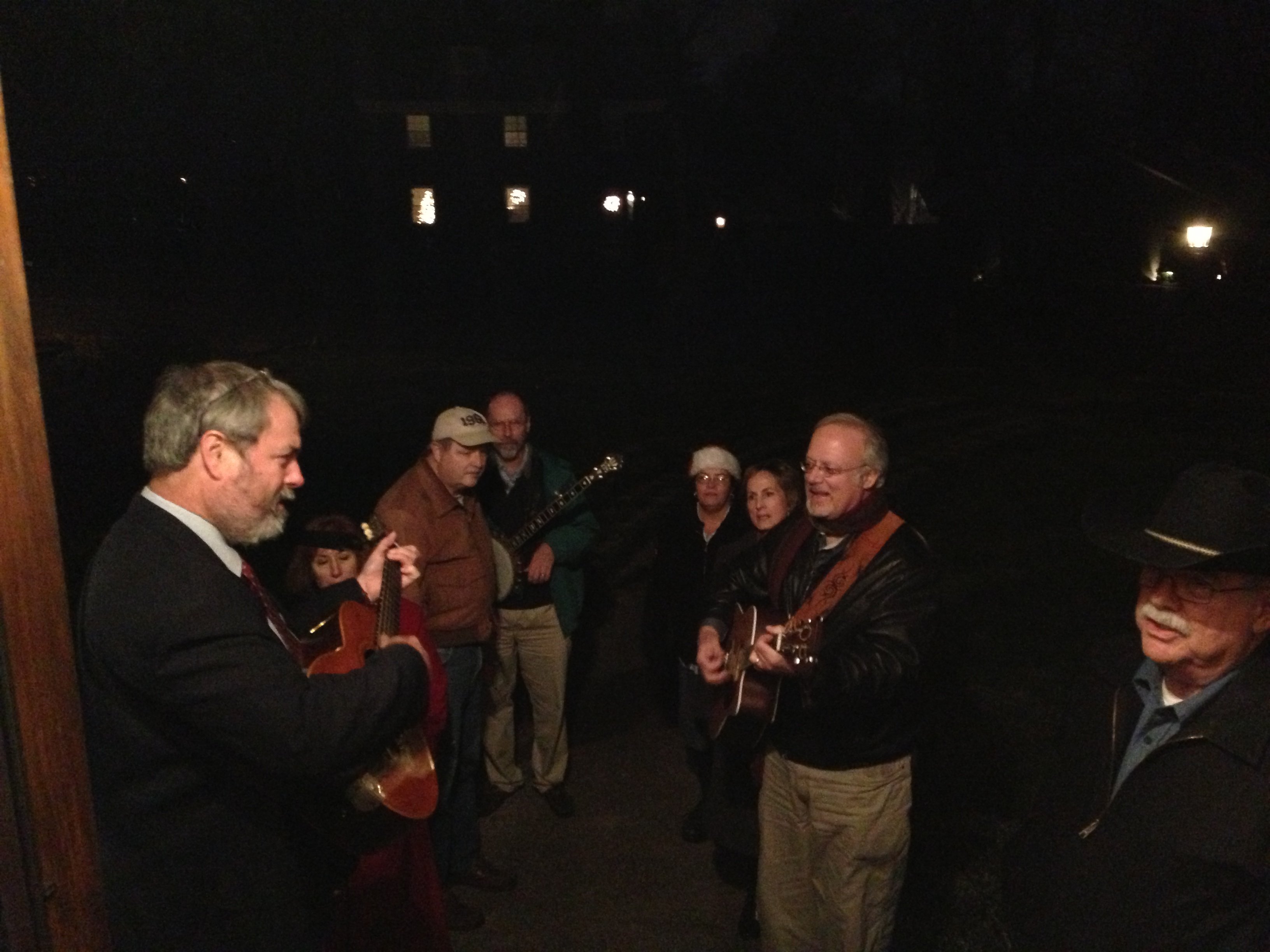 Earnie, John, Earl, Kathy, Mary Ellen, Bob, and I surprise the neighborhood as we sing carols door to door, fundraising for a Nashville daycare center.

Bob, one of the band members, then invited us to form a new group that plays almost exclusively in nursing homes. September 2018 marked our eighth anniversary of playing at least three times a month. Our repertoire of gospel and old hymns is very popular among patients and staff; most everybody knows the words and many sing along as they are able.

The camera caught Earnie, Bob, me, Clare, and Jim by surprise.

I tell you all this to offer a backdrop to 43 years of what I call surprise and delight.

One of the earliest things I did after learning how to play the spoons was to invent and use the “Happy Birthday Cha, Cha, Cha.” It’s pretty much the same as the original except that most lines end with “cha, cha, cha.” I lead the singing of that at most birthday parties I go to at home or elsewhere. But for me, the most fun is at restaurants. You see, I try to make it a surprise.

My favorite gambit is to solicit some volunteers to be a cha, cha, cha chorus. I like to find a table with two to four youthful guests. I’ll go sit down with them. By the time I’ve shaken everybody’s hand and introduced myself with, “It’s good to see you,” two are convinced they know me but don’t remember how.

I invite them to come sing cha, cha, cha backup and surprise my friend. So… off we go back to the table where the birthday boy or girl is usually very surprised—and once the embarrassment wears off—delighted as well.

I’ve done this so often and for so many years nobody in my family is embarrassed any longer. People do get wary, though. Our friend Lanette wanted no surprises at the Spaghetti Factory and asked whether I’d brought my spoons. I truthfully told her I hadn’t, but when it was time, my wife passed me the spoons we’d hidden in her purse. It’s all about surprise and delight.

I also like to show up and play impromptu with different bands. I have played with a Dixieland band on a Mississippi River paddle boat, a mariachi band in a restaurant, an Eagle’s cover duo on St Martin’s Island, and a Cajun band, as well as several street bands in New Orleans. I also got to play a solo with a jazz quartet in the swanky Court of Two Sisters in New Orleans at a Mother’s Day brunch. Very cool. 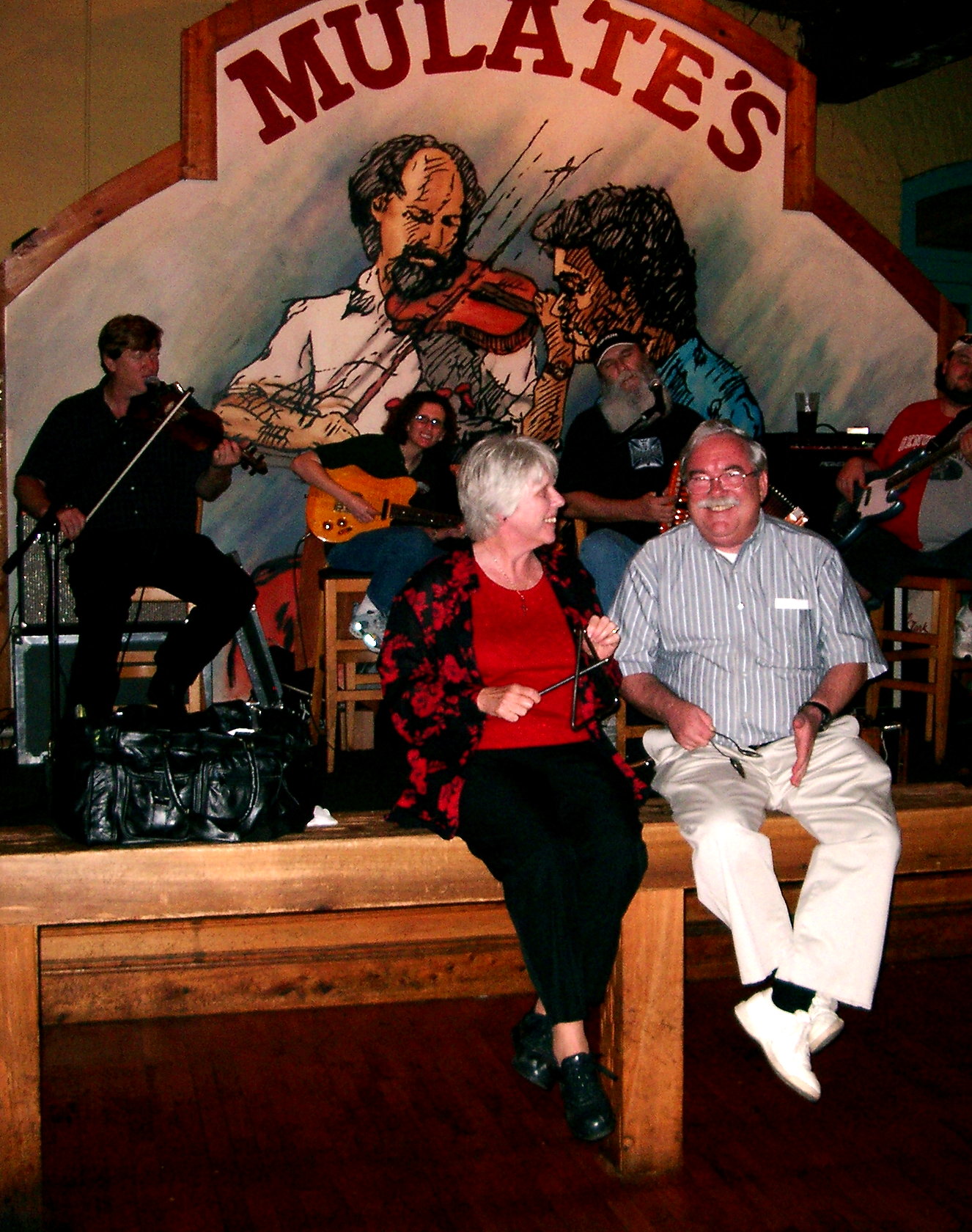 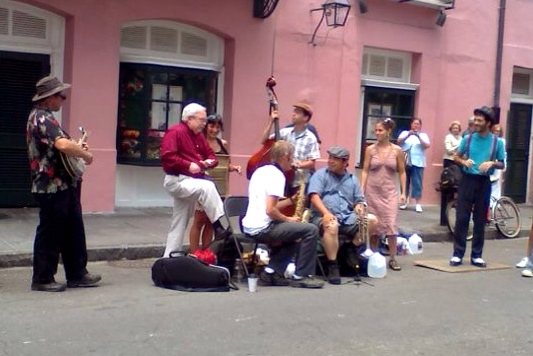 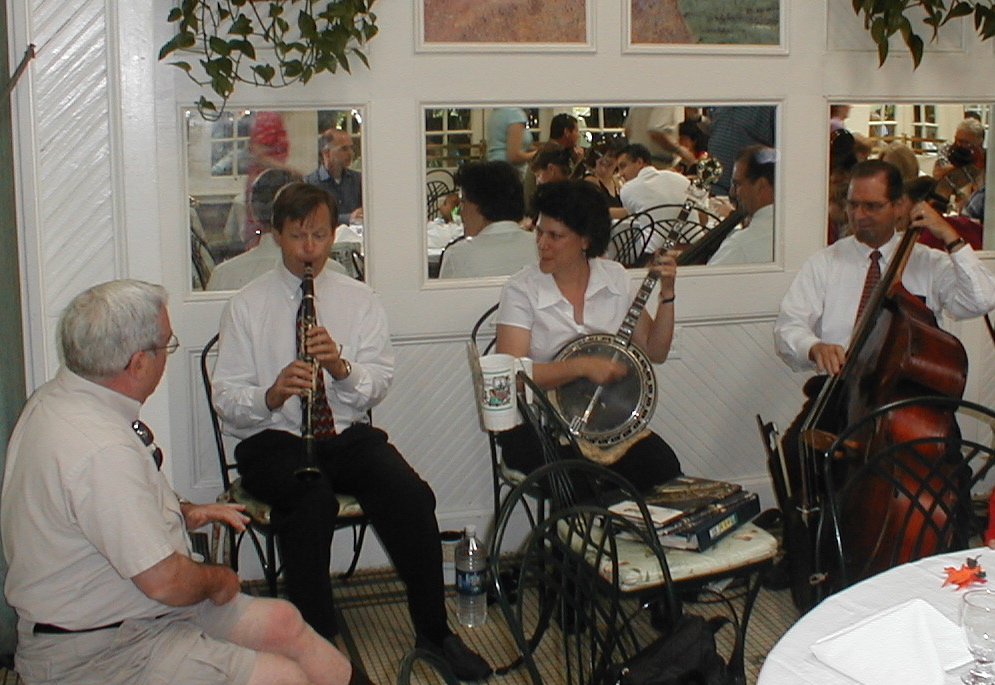 I definitely surprised the jazz group on Mother’s Day!

As often happens after I play, two kids invited me over to show them how the spoons worked. They were surprised and delighted.

One time the table was turned on me. When I was leaving a restaurant where we’d celebrated my daughter’s birthday with my signature song, I heard coming from the kitchen the unmistakable sound of two spoons banging together. These weren’t just the usual kitchen noises! I found some of the wait staff trying to work with spoons to get the sound right. I took some time and gave them a spoon lesson. I was surprised and delighted that day.

I was surprised and delighted again one afternoon in a nursing home. We saw a mother and daughter on the sideline that afternoon. Mom had her head on her daughter’s shoulder most of the time, but she was singing along with her daughter. Afterward, the daughter came up to thank us for “bringing Mom back.” Mom had Alzheimer’s and hadn’t talked in over a year. The daughter told us that she had grown up singing those songs to her mother’s piano playing. For that one brief hour, we were able to bring Mom back for an encore.

I was surprised and delighted.

Singing in nursing homes is fun but also eye-opening. Some patients walk to the performance on their own. Many more have some sort of conveyance like a walker. Still, others are brought in a wheelchair or bed. It’s not uncommon to see people hang their heads and slump in their chairs. Some even seem asleep.

After the music one afternoon, I went out to meet and greet some listeners. I saw a head rise off the table; I stuck out my hand to shake his and said, “Hi, I’m Ed. Did you enjoy the music?” Straight away I felt his grip tighten on my hand and heard a whisper, “Oh. Very much. It was great.” I had thought he had slept through the whole concert. But no. I saw an unmistakable light in his eyes.

I learned a valuable lesson that afternoon, one that I hope you take to heart too: Surprise and delight are universal. I knew that kids could be surprised seeing spoons played. I knew that musicians could be surprised and sometimes delighted by hearing a well-placed burst of rhythm from what they thought an unlikely source. But… I hadn’t known that even if you can’t talk anymore or raise your head or clap, there is still room for surprise and delight in your heart. 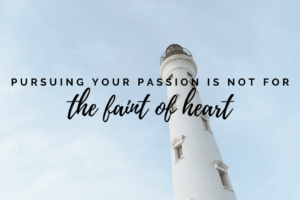 Warning! Pursuing Your Passion Is Not for the Faint of Heart 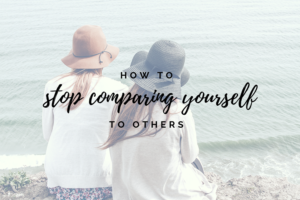 How To Stop Comparing Yourself to Others 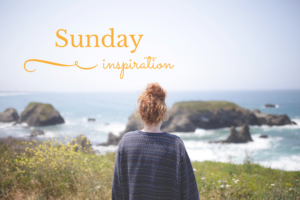 Sunday Inspiration: If You Say So 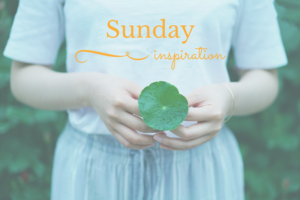 Sunday Inspiration: Start With What You’ve Got